During the past several weeks, I have learned so much about the LGBTQ+ community and the space I hold within it. I’ve reflected on my own background and the barriers in place towards guaranteeing the freedom to be myself, but also the systemic barriers faced by those with less privilege than I. Through this experience, I’ve started recognizing my ability to not only advocate for those similar to me, but have also started the ongoing process of being an ally for those who often don’t have a seat at the table. I’m extremely grateful to Victory Institute for this opportunity and will not stop fighting until we all have a seat with all of our intersectional identities recognized and included.

In early June, I walked in Capital Pride with DC Mayor Muriel Bowser and the entire Mayor’s Office, I felt a joy and freedom I’ve never before experienced. Walking in World Pride in New York City this past weekend, I again felt that same joy and freedom only found through being with those who accept me for me. 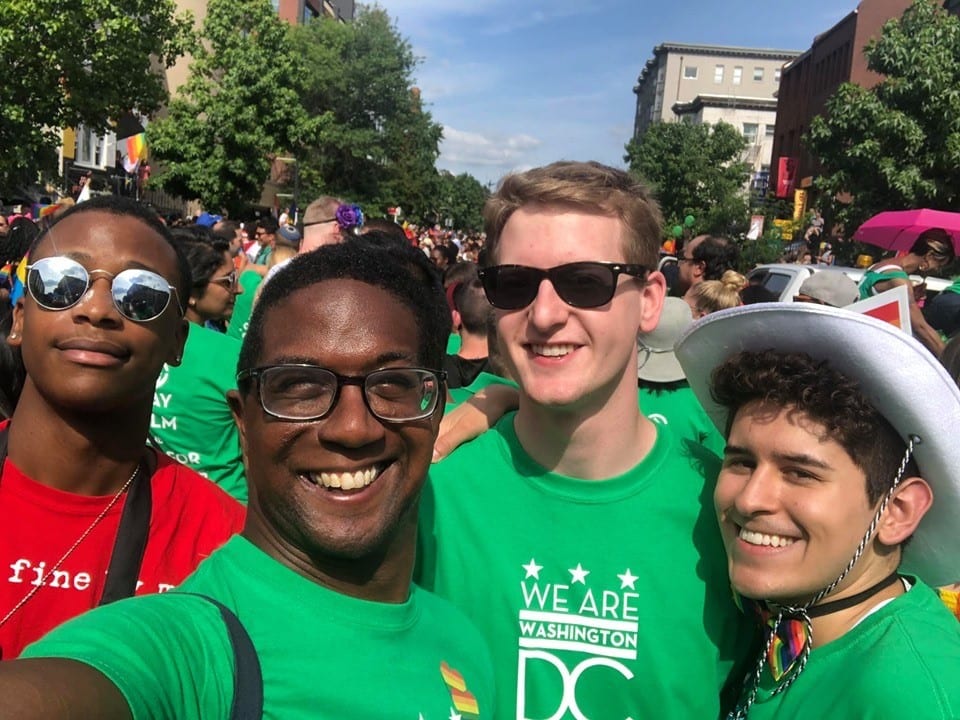 At every turn, I’ve begun to understand the immense progress our community has made, but also the work that must be done to ensure equal rights and liberties for all of us. The theme of my experience has been learning. I learn something new every day and couldn’t ask for better teachers than the members of the incredibly diverse LGBTQ+ community I am fortunate to call my own. I’ve learned about how complex the LGBTQ+ community is, but also how inspired, creative, and passionate we all are to do something amazing in the world. I wouldn’t trade that for anything.

At the Victory Institute Congressional Pride Reception in June, I learned about the work of Senator Tammy Baldwin (who’s probably one of the nicest people I’ve ever met) over the past two decades to increase the Victory Institute International LGBTQ+ Leaders Conference from 14 attendees in 1986 to more than 500 attendees in 2018. I’m incredibly grateful for those like Senator Baldwin who will not rest until we are all accepted for who we are, especially in a political climate like today’s where compromise is less and less common. In my Congressional office working for Senator Doug Jones, I’ve also grown to love working on behalf of Alabamians. Sure, it’s easy to put a face to a deep-red state like Alabama given recent events, but things aren’t always as black and white as they seem – I often answer constituent calls from those voicing support for the Equality Act and am surrounded by a full staff of accepting, supportive, and inspiring individuals from Alabama. The Senator’s office is a special one, and I have pride in working for someone who can always find commonalities with other lawmakers in a bipartisan way.

Having worked in the office for five weeks, I’ve already had the opportunity to contribute to LGBTQ+ legislation like the Equality Act (the Senator gave an incredible Senate floor speech about the Act during my second week) and am excited to continue my work advocating for the community throughout the remainder of the summer. There’s some incredible work being done on the state-level in Alabama too, so I’m constantly reminded that progress and change are always at work, even in the places where they’re least expected. My experience thus far has challenged me to grow in my respect for myself and enabled me to become an advocate for what I know is right. I’m in love with DC and am inspired daily by the passion of each and every member of the intern cohort. I consider myself immensely fortunate to be surrounded by those who challenge me to dig deeper, open up, and be myself. I’ve made some amazing friends through the program and greatly look forward to seeing what the remainder of the summer brings. Let’s get to work!