Victory Institute was founded in 1993 by LGBTQ advocates and donors who recognized the need to prepare LGBTQ people to run for office nationwide. With less 50 openly LGBTQ elected officials across America at any level of government, our founders understood that boosting our numbers in public office would be key to advancing equality. In creating Victory Institute, they recognized the need to train more LGBTQ people to run for office and to provide them support once elected. William Waybourn (front), who served as Executive Director of Victory Fund from 1991 to 1995, and of Victory Institute from 1993 – 1995, with Victory Fund staff member Vic Basile.

LGBTQ leaders at the International Network of Gay & Lesbian Officials, which would be folded into Victory Institute.

Brian Bond becomes Executive Director of Victory Institute and serves until 2003. Bond is credited with substantially increasing the number of out gay and lesbian elected officials from 129 to 228. Victory Institute organizes a historic meeting at the White House between President Bill Clinton and 11 openly LGBTQ elected officials. During the 90-minute meeting, the group urged President Clinton to press Congress to pass the Hate Crimes Prevention Act and the Employment Non-Discrimination Act. 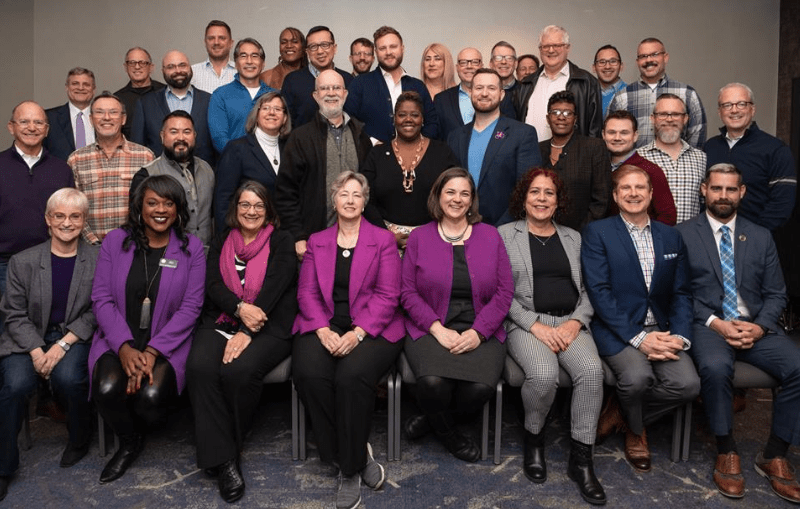 Victory Institute holds a joint conference with the International Network of Lesbian and Gay Officials (INLGO), which was founded in 1984. In 2005, INGLO merges with Victory Institute, consolidating the annual skills building and networking conference now called the International LGBTQ Leadership Conference. The conference is now the largest gathering of LGBTQ elected officials in the world, with more than 550 elected officials, leaders and advocates attending each year. The 2019 class of Victory Congressional Interns.

Aisha C. Moodie-Mills is selected to succeed Chuck Wolfe as Victory Institute’s president and CEO, making her the first woman and the first person of color to lead the organization. For only the second time in history, every U.S. state has at least one openly LGBTQ elected official currently serving. The U.S. Senate confirms former Victory Fund Board Member Eric Fanning to be Secretary of the Army – the highest-level presidential appointee in history. “I am a product of the [Presidential] Appointments Project,” said Fanning. “Putting me on the list brought my name to the attention of people who didn’t know I was gay.”

Victory Institute and Caribe Afirmativo hold the largest gathering of international LGBTQ elected officials in history at the 4th LGBTI Political Leaders of the Americas conference in Bogota, Colombia. More than 400 people from 42 countries and territories were in attendance. Victory Institute President & CEO Mayor Annise Parker (left) joins a panel of leaders from around Colombia at the 4th LGBTI Political Leaders of the Americas conference.